The START-study is a landmark study of immediate therapy
versus delayed treatment initiation (less than 350 cells/μL) in
HIV-positive patients with more than 500 CD cells/μL at randomization.
Immediate therapy led to a decrease in AIDS-development,
death, and serious non-AIDS complications compared
to deferred therapy. In this substudy, the effect on the
CD4 development in three different subgroups was evaluated
(n=4,612). The participants were divided into three groups
based on the duration of infection: less than 6 months, 6-24
months, and more than 24 months. A multi-assay algorithm
was used to estimate the duration of infection in patients who
did not have a known date of infection. The CD4 benefit within
each group was compared between immediate therapy and deferred
therapy. After an average follow-up time of three years,
the overall CD4 count was 194 cells/μL higher in the immediate
versus deferred arm. In the three subgroups, the difference
in CD4 count was 231, 202, and 194 cells/μL, respectively, using
linear models. The differences between the groups were statistically
significant with the biggest difference found in those
infected less than 6 months.

Comment: Yet another piece of information about the benefits
of early detection and immediate treatment initiation in
HIV-infection 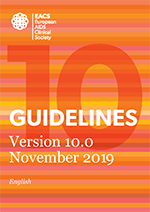 When you sign up for the newsletter, you also agree that we process your personal information.